Sellers who threaten, extort or intimidate Buyers can be reported to FTC!

When people buy services, occasionally one will come across sellers who may threaten buyers or extort high ratings and even try to intimidate users. The first step should be to report it to Fiverr Customer Care. Fiverr considers sellers as independent contractors and any legal action should be pursued between the buyer and the seller.

Irrespective of where you are based in the world, as Fiverr is a platform service and is operating under the guidelines of FTC, one can take the following actions :

While I agree that making counter threats is deeply unproductive, I couldn’t help but think of this meme as I read through it.

Just report scammers/bad eggs to Fiverr, and get your money back. You could report to the FTC and the hope that a bunch of Californian lawyers will get their thing up and running sometime in the next decade, too. But just ask yourself which 27 countries, and why should they crumple to US demands, any more than the US should crumple to other national demands? As a Brit, I’m still annoyed at your little tea party, guys. Such a waste of good tea.

This meme probably isn’t appropriate, but it makes me chuckle every time, and honestly, that Californian lawyer bit is calling for a puncture.

Awesome, can I report the buyers who try to extort free work out of me by threatening a bad review?

A simple cancellation or asking customer service to cancel would save a lot of money and time spent on resources for activities someone thinks is the most important thing in the world. Especially when view points can differ and ESPECIALLY when people can use this same system for abuse and intimidation on either end of the deal.

I prefer my tax dollars to go towards better resource uses. I also think about the amount of phone calls or visits Fiverr will endure over escalated situations over $5 dollars, that I’m sure they don’t want to deal with, otherwise they would have posted this in their T.O.S.

FTC only applies to America, so for the rest of the world this is pointless…

yes, is it really worth going to FTC and all of this…

just contact fiverr and explain to them what happened so that they will return your money back.

Living in Australia if I made a complaint to the FTC in the US they would pretty much ignore me and tell me to contact the appropriate organisation in Australia, which would be Consumer Affairs, your information only applies to the US and is redundant for the rest of the world!

In the USA anyone is legally allowed to write a review either negative or positive of any business, professional, or company. It is free called speech and is protected by the First Amendment to the United States Constitution.

Yes, there have been court cases which were ruled in favor of free speech online, protecting anyone who writes the truth of their experiences.

The United States Federal Trade Commission does not operate nor have authority in other countries.

This made me laugh. If you have time for this, then you have TOO much time on your hands. Get over it and move on.
These are sad AND weak individuals who have to take these extreme measures, but there are worse things people are fighting over in court so go ahead and waste your life away with this nonsense…lol.

Personally, I don’t like the FTC, the FTC made my life hell. Let me explain, I used to have a payday loan client that was using the term “instant [loan] approvals,” a popular term in the industry. The FTC accused my client of deceptive advertising, and since my client was a wussy, we had to change HUNDREDS of advertising pieces and replace “instant approvals” with “instant decisions.” That was a pain in the butt, it was annoying as hell, it was stupid because like I said, everyone else writes “instant approvals” but the FTC doesn’t pick on them, they go after the big boys.

Frankly, why do we have an FTC? Commerce has existed since the days of cavemen. So let’s not waste time with the FTC, the private sector is better and faster. If a seller refuses to cancel, talk to Fiverr (customer service). That’s it. No need to involve big government here, as a matter of fact, Fiverr and the gig economy works because government isn’t involved. If government was involved, you would need a license to sell on Fiverr, maybe take a test and who knows what else?

Before reading this post, I used to believe that only sellers are threatened.

Thank you for this information. I am not surprised that most of the people attacking this post are sellers. My experience on Fiverr so has been okay, but this information is very helpful.

More and more buyers need to read this post.

Reply to @r3k0d3d: Sorry, FTC has much far outreach as the same methods used by institutional hackers to damage North American companies (Sony Hack, Ashley Madison Hack) are used by low level trouble creators worldwide. Countries around the world are aware that the same thing happening to North American companies is happening to their businesses and cyber attacks are becoming a method of causing economic interference in operation of companies.

FTC Database is regularly searched by multiple agencies which have a great working relationships between most of the developed world and are slowly adding more countries into this network.

Both the high level trouble creators and low level trouble creators use anonymous proxies which is actively monitored by NSA for national security purposes. Anyone using multiple anonymous proxies or TOR network is monitored by NSA and Five Eyes Network (Australia to Germany to UK to Canada to USA). As such, anyone who thinks they can hide beyond anonymous proxies to blast negative links are sadly mistaken. They are probably already on the radar for bigger issues. The networks allow agencies to find out more bad people in such networks. A local drug dealer is always connected to the bigger ones. A buyer of street drugs is connected to more such buyers and is connected to dealers who are in turn connected with the bigger bad guys. As such those providing and selling potentially illegal services (Negative SEO) maybe linked with a larger malicious network. Sellers and Buyers form a kind of social network and tapping into any part of the malicious network exposes the complete network.

Read this article here as to how such networks are mapped. This is similar to how other networks are exposed.

In today’s world, the threats are of these kinds :

For (b) to (f), an FTC complaint may place these people on the radar of multiple agencies irrespective of where they are. The most damaging attacks on businesses and users today are occurring online, so all countries are teaming up together. It is just a matter of time when new laws will be released to this effect (late 2015-early 2016)

That said, I agree with others here that if easier, lower level and more effective are available, one should use them. If cancellation helps, one should use it and get out. But occassionally, one will meet the bad guys, so do report them. You may help the FTC and other agencies find and home on to someone they may have interest in.

Reply to @joeyperezwest: I agree with you that this may be the best option if it works. Wherever it does not work, one should go all out. There are couple of cases where you can cancel the gig but still face negative SEO and negative link blasts. In such cases, the ratchet should be turned harder.

Reply to @jtengle: Well yes if the threat made is illegal. Threatening a bad review is not considered illegal but threatening to do negative SEO on the seller is illegal. Anything illegal must and can be reported.

You bring a good point. In US and Canada, there are cases where companies actively have been subpoenaing I.P records of users who leave negative comments online about sellers and have sued them successfully in civil courts. Google it, there are many cases.

As lawyers and legal firms are losing business to technology related legal startups, they have found that this is a good market to chase (both for sellers and buyers). So, if you have the legal resources to chase those leaving negative reviews without any basis, find a contingent lawyer and chase them down, make them pay. If the buyer is leaving a bad review on your site or Fiverr, you may not be able to to do much. The buyer has to cross into the defamatory or criminal zone to be chased down and made to pay.

Read the below link. This is for those buyers who become malicious towards the sellers and without filing legal and civil complaints start doing online defamation. 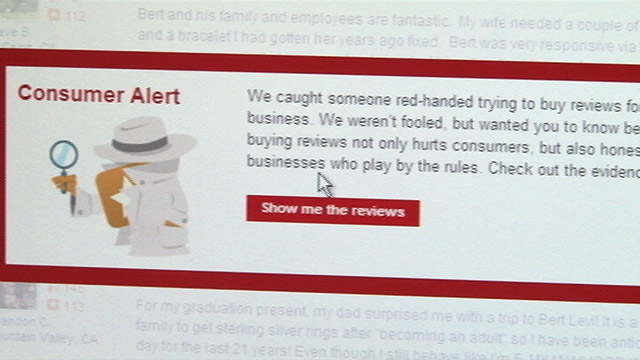 Reply to @dtongsports: I agree. Good luck trying to get a gigantic government agency to do anything about anything so small.